“Rose Capital” Tyler Attracts Visitors from All Over the World

Tyler, Texas entices visitors from all over the world with its spectacular public rose garden and enchanting annual Texas Rose Festival.

The Smith County seat had an estimated population of just over 100,000 in 2019, making the city nestled in the northeast part of the state just off Interstate 20 about midway between Dallas and Shreveport, the 38th most populous city in Texas.

According to the East Texas Weekend, “half of all rose bushes sold in the United States actually pass through Tyler before making it to your home”.

“There are plenty of flower fans that head to Tyler for the classic rose experience. People come from all over the world. Master Gardeners, American Rose Society members, rose enthusiasts, and people who just love roses to plant in their garden at home,” says East Texas Weekend.

Tyler is the “Rose Capital of the World”

Tyler is called the “Rose Capital of the World” thanks to its history with the colorful flowers that bloom each year in mid to late May and October.

The biggest draw to Tyler is the Tyler Municipal Rose Garden which features 14 acres with more than 35,000 rose bushes and more than 500 varieties of roses. The rose garden is open dawn until dark, seven days a week with free admission.

Perhaps the highlight of the rose season in Tyler is the annual Texas Rose Festival which started in 1933.

“The Texas Rose Festival has represented the spirit that brings Tyler together as a community,” says VisitTyler.com.

The 88th Annual Texas Rose Festival is set for October 14-17, 2021 and will feature such ceremonial events as:

There are concerts, art shows and festivals, wine tastings and a host of other events surrounding the annual rose festival. 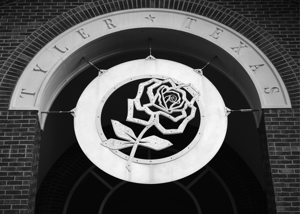 Tyler is so closely associated with roses today; it is hard to imagine that the city was famous at one point for growing …. peaches!

The East Texas Weekend says that around 1900 the peach crops developed diseases and died.

“The farmers were looking for a new crop to grow and some folks with European heritage thought the area might be good for growing roses. So, they tried it. And then it blossomed into a multimillion-dollar industry,” says the East Texas Weekend.

Tyler Named for the 10th President of the United States

Tyler is named for the 10th President of the United States, John Tyler, who became the first Vice President to succeed to the presidency without an election when his running mate, William Henry Harrison, died of pneumonia just one month after taking office in 1841.

While Tyler was a native Virginian, he held a special place in the heart of Texans for his role in the annexation of the state.

Texas had declared independence from Mexico in 1836 and Tyler made the annexation of the Republic of Texas a priority of his administration.

Just three days before the end of his only term, Tyler signed a bill into law in February 1845 that offered annexation to Texas – which was accepted by the Lonestar State on Dec. 29, 1845, making Texas the 28th state in the Union.

Tyler was legally created by an act of the Texas state legislature several months after the state official became part of the United States.

A 28-block town centered around a town square was tabbed to become the count of seat of newly created Smith County.

Tyler was officially incorporated on January 29, 1850, and a brick courthouse was built in 1852 to replace a log building serving as courthouse and meeting hall.

Agriculture dominated the Tyler economy, first with cotton then peaches and finally roses.

While roses are the big attraction in Tyler, there are a lot of other things to do on a day trip to the area including an impressive number of museums: