The Six Flags Of Texas 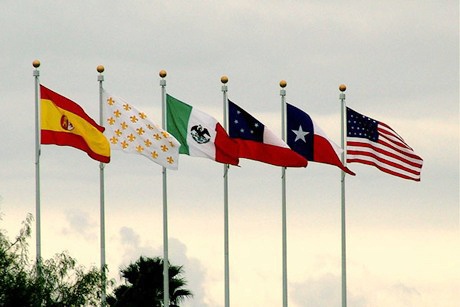 Six Flags Over Texas is not just an amusement park with rides like the Titan, Runaway Mountain and Texas Chute Out. There are six actual flags that have flown over the Lone Star State in its long and turbulent history. Take a look at each of these flags, which are represented by coats of arms on the exterior of the Texas State Capitol building.

From 1519 to 1685, and again from 1690 to 1821, Texas was ruled by Spain. At this time, there were two different Spanish flags that flew over Texas. However, the flag that is officially represented in the state by the Texas State Historical Commission features a red and gold pattern of stripes. In the left-center are a castle and lion insignia.

From 1684 to 1690, Texas was held by the Kingdom of France under the rule of the French explorer Robert de La Salle. During his final expedition, La Salle founded his second Fort Saint-Louis near where Victoria, Texas is today. His colony was short-lived, and La Salle’s death left it abandoned. During this time, France did not have an official flag. Instead, a royal banner featuring a yellow-gold fleurs de lis print on a white background was flown.

When Mexico gained its independence from Spain in 1821 and regained its Texas soil, the state flew the Mexican flag from that year until 1836. Featuring green, white and red vertical stripes, the flag has an eagle eating a serpent while sitting on a cactus in the center.

As a result of the Texas Revolution, Texas declared independence from Mexico in 1836. From 1836 to 1845, the state first flew the Burnet Flag that would later be known as the Lone Star Flag. Both are the same in design, featuring a vertical blue stripe to the left side with a white five-point star in the center. Red and white horizontal striping runs across the right side of the flag. This is the most popular of the six flags over Texas, as Texans have a strong attachment to the banner. The Lone Star Flag became the official state flag in 1945. 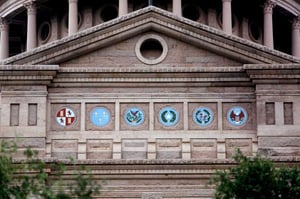 Flag of the United States of America

When Texas joined the United States of America in 1845, the flag of the US became the fifth flag of the state. This is currently the official flag of the state, although the Lone Star Flag remains in high popularity. It features the blue square in the left corner with 50 white five-pointed stars along with a red-and-white striped banner of 13 stripes.

Flag of the Confederate States of America