TMLIRP is committed to providing risk management services and a full suite of liability, property, and workers’ compensation coverages to Texas cities and other public entities. The Pool’s Board of Trustees is comprised of municipal officials from across the state of Texas.

For the latest installment of “Meet a Trustee,” the Pool interviewed longtime Trustee Mary Gauer. 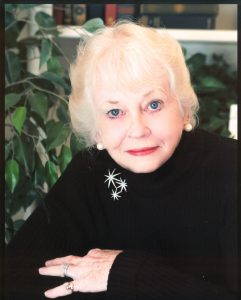 When someone is referred to as a “force of nature,” it means she has a strong character, is unstoppable, and is unforgettable. Mary Gauer can’t be described any other way.

Mary served the City of Harker Heights as a councilmember and later mayor from 1992-2005. She joined the Risk Pool’s Board of Trustees during her first term as mayor, and she rose to Board Chair during 2010-2011.

Why did she run first for city council? “We moved to the city and bought this house, and the city had an infamous ‘red light district,’ which was a strip of houses of ill-repute. We actually had girls modeling lingerie in storefront windows.” Once elected, Mary dedicated herself to cleaning up the area. She helped bring all the city’s authority to bear, using every available resource. Was she driven to solve the problem? “‘Driven’ is a polite term. I wasn’t driven, I was MAD.” And so began her political career.

She had never run for office or – in her words – “held a regular job for more than a year because Army orders don’t lend themselves to that.” But her accomplishments by that time were already formidable. “Military spouses know how to organize, help each other, and get things done.” She was also a Girl Scout/Brownie mother. “Every Monday was Scout Night at the Gauer house, and Brownies came over after school and Cub Scouts met after dinner.” Her service earned her an appointment as a Girl Scout Woman of Distinction in 1996. The appointment recognizes leadership, personal accomplishments, and community contributions that inspire young females to make the world a better place.

Has she had issues being a female politician? “No. When I was first elected to council, I couldn’t see my name plate from the dais. I always wondered why constituents and others referred to me as ‘councilwoman’ – I would have said councilman or councilperson. It took me awhile to figure out that the city secretary put that title on the name plate. Luckily, I became mayor, and it didn’t matter anymore!”

When asked who she would choose to have a meal with, she said, “a woman politician.” She mentioned visiting the U.S. Supreme Court and watching oral argument as a visitor and reflecting on how far women have come. “I remember the guard let me sit in on more sessions than he usually would have. I must have been so well-behaved and transfixed. It sounds like a funny thing to be proud of, but it meant a great deal to me. The time frame of my life has been a time of great change for women.”

Why did she run for mayor? “Because the other guy left, I guess…” That may have been the reason, but by then she was dedicated to being the most educated city official in Texas. After her first year as a Councilmember in 1992, she was one of the first three elected officials to earn recognition by the Texas Municipal Leadership Institute (TMLI). The Texas Municipal League (TML), and its affiliate the Texas Association of Mayors, Councilmembers, and Commissioners (TAMCC) encourage elected officials to learn about city governance through educational opportunities related to their policy-making and leadership skills. TML and TAMCC sponsor TMLI to recognize elected officials who commit to professional development. The recognition, for completing a certain number of hours each year, begins with a certificate of recognition and increases to certified municipal official. Mary continued to be certified every year until 2005.

“I learned a lot from the certification program. That first year, all three of us who received it were women from the central Texas area. I thought it unusual we were all women, but I wasn’t surprised we were from this area because we all supported each other.”

She immersed herself in service to both TML, TAMCC, and the Pool. She served as TML Region 9 President, as Chair of several TML legislative committees, and as TAMCC President in 2002.

She was first elected to the Pool’s Board of Trustees in 1998 while concurrently serving TML and TAMCC, and she was elected Board Chair for 2010-2012. What made her want to be a part of the Pool’s leadership? “Honestly, I’m not so sure I was totally aware at that time of the Pool and what we do. The mayor in Killeen decided not to run for a board position, and he recommended me to serve. I just don’t think all local officials understand who we are and what we are doing, and I’m glad we are taking steps now to educate them that we aren’t an insurance company. We are partners, and I’ve enjoyed my relationship with the people at TML and the Pool.

As if she didn’t have enough on her plate, she also chaired the Central Texas Council of Governments (CTCOG) and was appointed by the governor to serve as a member of the State Community Development Review Committee from 1996-2002.

What is Mary most proud of about her service to the City of Harker Heights? “A feeling of comradeship among the council. We were a collegial group of people working to solve regional problems. The same with the CTCOG and neighboring cities as well – we even carpooled with neighboring city officials to TML regional meetings.” And serving as a Pool Trustee? “With very few exceptions, people seemed to be prepared for the board meetings and put their all into it. Those of us who take the job seriously, sometimes even if there isn’t direct knowledge of an issue before we start, we come with the idea that we are representing different cities/members, and the entities are unique. It’s something you wouldn’t pick up without the relationships you develop.”

That begs the question. How has Mary made time for this intense level of public service? “Having four children! I had to learn to make time for each of them. If you want to do something, you make time for it. I would read the board packet in parts when I had time.”

“Think about it this way,” she said. “If one child has fallen and is screaming, the other child who wants your attention must wait for the blood to stop flowing from the first one! My son Joe had open heart surgery at seven years of age and again in high school, and made it to adulthood, but he later tragically died in a car wreck on I-35.” That’s why she was so passionate about widening and improving safety on that road, leading to her service as chair of her region's transportation planning organization. “You can’t have a child die and not be passionate about transportation issues, and you make time for it.”

When asked if one of the Pool’s Core Values (integrity, public service, fiscal responsibility, and operational excellence) is more important than the others, she first mentioned fiscal responsibility. “Fiscal responsibility comes to mind, but if you don’t have all four of them, you’re not serving the rest of them. I keep the plaque with them on the windowsill in my office so I can see them when I’m working.”

What does Mary enjoy doing besides impacting the world in all her amazing ways? “I enjoyed the cruises that Ralph and I went on … you get away from yourself and your life, and you can do something, or just do nothing.” (Mary’s husband of 62 years passed away this year.)

“With Ralph gone, it’s a different life. He enjoyed coming to TML and Pool events, and was well-known as “Mary’s Driver!” I have a stack of needlepoint waiting to be done or finished, I’ve had my first great-grandchild, and thank goodness my kids are close by – we pretty much eat every supper together.” Family is clearly a cornerstone of Mary’s life.

Her church has started a widower’s group that she’s active in. But most of all, she plans to relax a bit.

She’s certainly not sitting idle as she contemplates the future. Mary served on the Board of Directors of Families In Crisis, Inc., a local non-profit agency sheltering and aiding victims of sexual assault, family violence, and homelessness, as the chair of a scholarship endowment foundation, and as an elected Citizen Member of CTCOG.

The Pool is honored to have a “force of nature” like Mary Gauer on the Board. She has taken such an interest in the work of TML and the Pool, and she has always led staff with grace and compassion. The Pool’s leadership and staff want to thank her for her dedication, and for making each one of us feel special every time we see her.

The Risk Pool’s Board is comprised of trustees who work in local government, are dedicated to public service, and understand the day-to-day challenges that are being faced. To learn more about your Board Members, visit the Risk Pool website. Other editions of Meet a Trustee can be found on the blog located in the news dropdown at the top of the page.