The Painted Churches of Texas

Most travelers zipping along I-10 between Houston and San Antonio do not realize that just off the interstate at the midway point lies some of the most beautiful churches in the Lonestar State, if not the entire United States.

Even if you got off-the-beaten-path you might pass these little gems by because the beauty of the “Painted Churches of Texas” lies not on the outside but on the inside of these places of worship built by German and Czech immigrants in the late 1800s and early 1900s.

Germans started coming to Texas while it was still a republic with the establishment of the Adelsverein (Society for the Protection of German Immigrants to Texas) by a group intent on Germans colonizing Texas. Some 7,000 Germans landed in Texas between 1844 and 1847.

More Germans and then Czech immigrants came to the new land after the upheaval in Europe of the Revolutions of 1848. What we refer to as Czechs today would have called themselves Austrian, Bohemian, German, Moravian or Slovak in the 19th century.

By the 1880s it was estimated that the population of San Antonio was one-third German and Europeans settled in droves in the surrounding picturesque Hill Country area.

These new Texans built dozens of churches across the state, many of them nondescript on the outside but stunningly ornate on the inside with marble, chandeliers, and painted walls and ceilings.

Three Ways to View the Painted Churches of Texas

There are three distinct ways you can view the Painted Churches of Texas.

If you are not travelling yet because of the COVID-19 pandemic you can check out this video from The Daytripper that tours several of the churches.

For those that want to hit the road, the Greater Schulenburg Chamber of Commerce offers a Painted Churches of Texas guided tour. The tour, available Monday through Saturday between 9 a.m. and 4 p.m., can be booked by calling (979)743-4514. See the chamber website for costs and more details.

Typically four churches are included on the tour, though two more can be added by special request. Churches on the guided tour normally include:

One of the benefits of the guided tour is that you not only get the detailed knowledge of the docents, but you gain access to the inside of the church in Dubina, which otherwise is locked to the public, which can only peak from just inside the front door.

The third option is DIY and visit the Painted Churches of Texas on your own.

A selection of Painted Churches of Texas to visit on your own, and located just off I-10, should include:

St. John the Baptist in Ammannsville

You will know why this church is called “The Pink One” when you see its wonderfully painted statues, walls, and domed ceiling. This is the third church on this site with the first church built in 1890 but destroyed by the hurricane of 1909. The church was rebuilt but burned down in 1917, and the current church was constructed in 1919.

This church, built in 1909, had its original artwork shockingly “whitewashed” in the 1950s, but since then the community has painstakingly restored the church to its original vision with a light blue interior and sparkling gold stars on the ceiling.

You can only view the inside of this church close-up if you take the guided tour, otherwise you can just take a glimpse through locked iron gates.

The “Queen of the Painted Churches”, St. Mary’s, according to tour guides, has been voted as the 7th most beautiful church in the United States. If you can only visit one of the painted churches, this is the one with its ornate decorations, detailed designs on the wooden alter and towering columns.

The church you see today was painted in all its glory in 1912.

This church, built in 1895, calls to mind the cathedrals of Europe with its dazzling stained-glass windows, golden crown moldings and white altars. The ceiling was painted by Godfrey Flury of Oensingen, Switzerland.

The antique chandelier in the nave was made in the former Czechoslovakia and dates to the 19th century. Until the 1930s it was lit with its original wax candles. Now it lights up with 3,000 individual crystals. 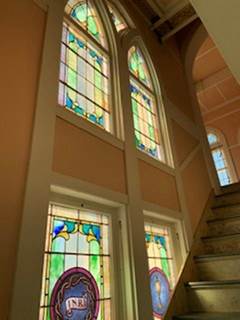 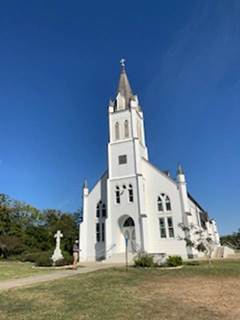 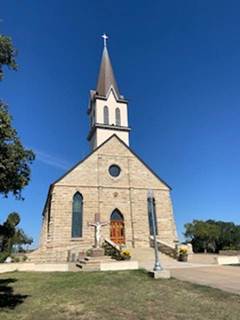 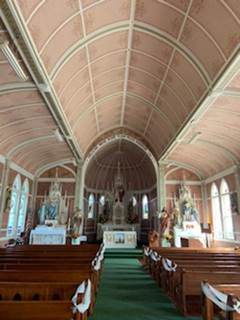