Don't Mess with Texas - The story behind the slogan

How Did the Phrase "Don't Mess With Texas" Become a Thing?

In a scene on Saturday Night Live in 2001, Will Ferrell, playing George W. Bush sitting in the Oval Office, sends a message to one of the world's most notorious terrorists.

"You violated rule numero uno," he says. "You messed with Texas. Don't mess with Texas."

But this iconic phrase has been around long before 2001 and Ferrell's cold opening. 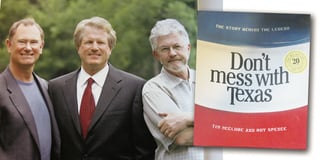 In 1985, Texas spent nearly $20 million annually in an effort to clean up litter along the state's roads and highways. In a time when it seemed as though everyone threw beer cans and garbage from their car or truck windows, the Texas Department of Transportation hired two ad executives, Mike Blair and Tim McClure, to come up with a campaign that would raise awareness, reduce litter and help curb the state's spending on cleanup. In a moment of inspiration while walking near his home, McClure happened to see some garbage and suddenly remembered that his mother used to tell him his room was messy. He realized that people usually equated litter with puppies. The word "mess" seemed more appropriate to describe the predicament the state was facing.

"Can We At Least Say Please?"

When the slogan "Don't Mess With Texas" was first pitched to the Department of Transportation, it was not a resounding success. In a day when "Keep America Beautiful" was the strongest command in advertising, one woman went as far as to ask, "Can we at least say please?"

However, Don Clark, Director of the Travel and Information Division of the Texas Highway Department, understood that this slogan was what they needed to draw attention to the cause. It spoke to that 18-34 male demographic in a way that the flowery slogans of the past could not. He went ahead with the new, cutting-edge slogan in spite of the board's reluctance, printing bumper stickers and highway signs and producing several television commercials.

A Part of Pop Culture 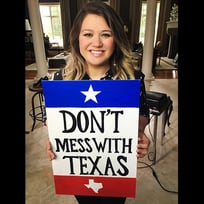 Since its introduction, "Don't Mess With Texas" has taken on a greater meaning for residents of the state. Few outsiders know its origin and instead think it’s a commentary on Texans' toughness. (Few Texans will correct that assumption.) Yet the slogan remains a trademark of the Texas Department of Transportation (TXDOT) which keeps tight control over its use. TXDOT has issued more than 100 cease and desist letters to people, organizations, companies and artists who have used it without permission, maintaining that they cannot allow anyone to use the slogan in ways that are not in keeping with the anti-littering message.

History in the Making

Even after 32-years, the anti-litter slogan continues to be one of the most successful ad campaigns, even landing a plaque on the Madison Avenue Walk of Fame and a place in the Advertising Hall of Fame. Beyond the intention of keeping Texas clean, this slogan has become a statement commonly used to declare Texas swagger.

So, the next time you're passing through the Lone Star State, be sure to put your garbage in a trash can. You don't want to make a mess.