What is the Political Subdivision Workers’ Compensation Alliance and How Does it Rank at Serving our Members?

WHAT IS THE POLITICAL SUBDIVISION WORKERS’ COMPENSATION ALLIANCE AND HOW DOES IT RANK AT SERVING OUR MEMBERS?

The Political Subdivision Workers’ Compensation Alliance (the Alliance) was formed in 2006 by five risk pools that offer workers’ compensation coverage and claims services to public entities in Texas for the express purpose of restoring the health of injured workers and returning them to work as soon as possible. Collectively, Alliance risk pools represent more than 3,000 public employers representing 500,000 employees.

Because the Alliance was formed by the member risk pools, it exclusively serves these pools and the public entities that participate in their workers’ compensation programs. Pools participating in the Alliance include:

The Alliance is structured as depicted below: 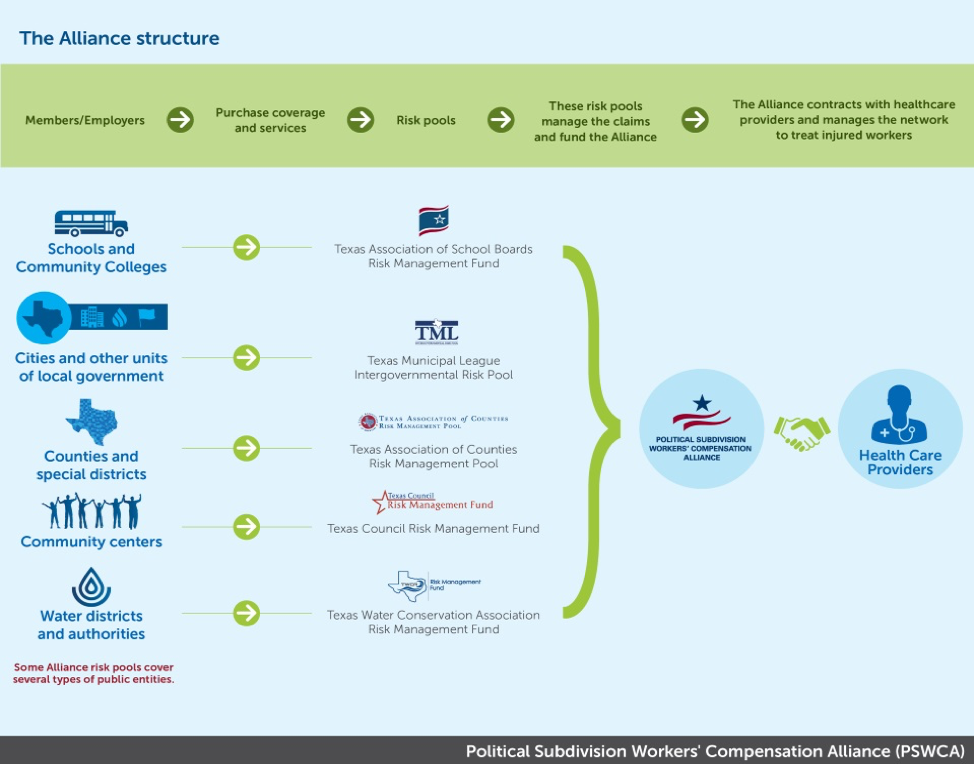 As a quality-focused network, the Alliance is committed to matching injured employees with top-notch providers who will get them back to health, back to work, and back to their lives. Our members are known for their service to their local communities — at city hall, the county courthouse, in schools, community centers, public utility facilities, and as first responders. If they get hurt on the job, the Alliance is here to make sure these dedicated public servants have access to top-quality healthcare providers.

The Alliance is different than your typical healthcare network and does not sell its services for a profit, nor is it commercially available. As a result of 2005 workers’ compensation reforms, Texas public entities have the opportunity to directly contract with healthcare providers in order to deliver the best medical care possible to injured employees. The Alliance was established under Chapter 504.053 of the Texas Labor Code to perform the direct contracting and credentialing of healthcare providers on behalf of its members (the pools.)

The Alliance remains one of the highest-ranked networks in the state. The REG uses data supplied by each network/provider panel for more than 100 data elements, denial codes, medical procedures and healthcare provider types. The REG also conducts a survey of injured workers by the Public Policy Research Institute at Texas A&M University. The time period for the 2018 network report card was for injuries occurring between June 1, 2016 and May 31, 2017 and evaluates 16 individual networks and groups. The data used included information for 219,000 injured employees, 5 million medical services, $400 million in medical payments to healthcare providers, and 3,200 completed injured employee surveys.

Among the more noteworthy findings of the report that compares the 15 networks, the Alliance had:

The Alliance is a consistent top performer since the REG began publishing network report card results. As a result, the Alliance continues to ensure that the best quality doctors treat our injured workers and return them to work in a timely manner with a high level of satisfaction of care. The complete report can be viewed at https://www.tdi.texas.gov/reports/wcreg/documents/netrc2018.pdf.

This article was originally published in the December 2018 issue of Texas Town & Cities; it was written by the team at TMLIRP.

If you are currently looking for coverage or have any questions, please contact our team.